His Holiness Drikung Kyabgon Chetsang, the 37th throne holder of the Drikung Kagyu Lineage and 7th reincarnation of the Chetsang Rinpoche is a manifestation of Chenrezig (Avalokiteshvara).

Drikung Kyabgon Chetsang, Konchog Tenzin Kunsang Thrinle Lhundrup, was born on the 4th day of the 6th Tibetan month of the Fire-Dog-Year 1946 into the aristocratic family of Tsarong in Lhasa. This auspicious day marks the anniversary of the Buddha’s first turning of the Wheel of Dharma.

Many prodigious signs and visions accompanied his birth.

His Holiness the Drikung Kyabgon Chungtsang is the 36th Throne Holder and the 8th Reincarnation of Chungtsang Rinpoche, after the foundation of the Drikung Kagyü Lineage by Lord Jigten Sumgön. He is considered a manifestation of Manjushri.

The Drikung Kyabgon Chungtsang, alias Tenzin Chokyi Nangwa, was born in Lhokha in 1942, the year of the Water Horse. He is the youngest of five sons, of the well known, aristocratic Lhagyari family.

His Eminence Garchen Rinpoche is a Drikung Kagyu lama who was known in the thirteenth century as the Siddha Gar Chodingpa, a heart disciple of Kyobpa Jigten Sumgon, founder of the Drikung Kagyu lineage of Tibetan Buddhism. In ancient India, he had

incarnated as Mahasiddha Aryadeva, the lotus-born disciple of the great Nagarjuna. In the seventh century, he was known as Lonpo Gar, the minister of the Tibetan Dharma King Songsten Gampo.

Garchen Rinpoche was recognized and enthroned in eastern Tibet by the former Drikung Kyabgon Zhiwe Lodro. When he was seven, he was brought to Lho Miyal Monastery, which he administered from the age of eleven. Studying and practicing under the direction of the Siddha Chime Dorje, Garchen Rinpoche received vast and profound instructions on the preliminary practices (ngondro), the fivefold practice of Mahamudra and the six yogas of Naropa.

Venerable Drupon Tsering Rinpoche is the resident Lama of the Drikung Garchen Institute of the Drikung Kagyu School of Tibetan Buddhism.
At the age of eight, Rinpoche took refuge from His Eminence Garchen Rinpoche. Three years later, Tsering Rinpoche received his novice ordination, the Bodhisattva vow as well as Mahamudra instructions from the great Siddha Karma Norbu, from the Karma Kagyu School. 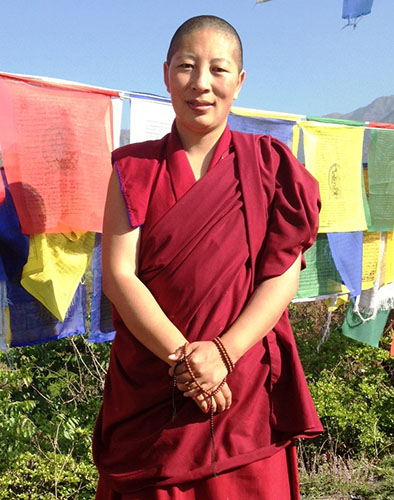 Konchok Palkyi has completed her three-year retreat in 2011 in India and is staying at the DGI since august 2013. She was born in Dehradun/India, where she studied Buddhist philosophy at Drikung Samtenling Nunnery and also served as head chant master. She became a nun at 13 years and besides her spiritual education, she is also a talented  musician and dancer. At the moment she is concentrating on learning German, and she will lead the regular pujas at the DGI during Drubpon Tserings absence.